Artists in Bryan/College Station, Texas were invited to share art at the 7:00 p.m. Good Friday service of St. Andrew’s Episcopal Church in Historic Downtown Bryan, Texas. Rev. Sean Cox asked for art - of any media - that had to do with the themes of suffering or betrayal or any “Good Friday” theme. Here in my first blog I will attempt to upload images of the two paintings I showed at this event. That night there was a poet, a writer, another artist and me.

The paintings are 40 inch square acrylic-on-canvas paintings based on drawings I did in 1998-99 in the year following the death of my first-born son, Lew Jessen Moore. After initial showings these paintings have taken up space in the back of a closet until Father Sean called them out of their tomb. In the Good Friday setting I saw things in them I hadn’t noticed before.

The first I call “Caregiver Stress.” It represents life as I often felt it in the ten years Lew lived at home with his family. Lew lived to be sixteen but the last six years he lived in a pediatric nursing home in Louisville, Kentucky. Life was small and often exhausting. That’s me (or my husband, Bob, or our other son, Judson) weighed down with stress. We loved Lew but his care became more and more demanding as his life became more and more challenging. Viewing this on Good Friday I saw that it could be Jesus holding you or me. THERE was Caregiver Stress but he continued to care and say “yes” to holding us and our burdens.

The second I call “Dissolving into a Heap of Tears.” The original drawing was me and expressed how I often felt in the early months after Lew died in 1998. I showed the drawing to a friend who was also the mother of a child who had severe multiple disabilities and she said, “This woman is crying not just from her eyes but from every cell of her body.” When I was dusting this painting off to take it to St. Andrew’s Episcopal Church, my beloved Bob said, “I know it’s not what you intended, but in this context this could be a woman crying at the foot of the cross.” Indeed. 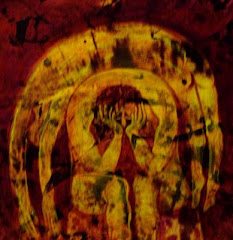 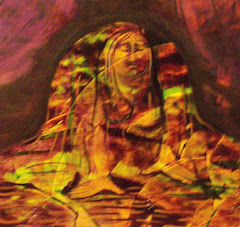